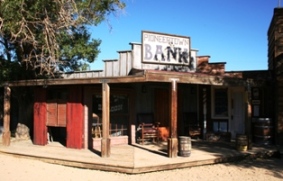 Back in March 2009, one of my great friends was about to celebrate his birthday. I knew this because he sent a party invitation via Facebook asking his friends to join him at the Rim Rock Ranch in Pioneertown (Yucca Valley) for the weekend.  I did some “googling” and read up on Pioneertown and it sounded both fun and like a great ride. So, I told him I would come up on my bike.

Pioneertown is four miles from Yucca Valley which is very close to 29 Palms and north of Palm Springs. I “mapquested” the route. About 120 miles… 2-3 hours. This would be an easy ride and it was somewhere new!

I took the 15 to the 79 to the 10 to the 62 toward 29 Palms. BE CAREFUL on this road (62). The wind is gnarly! I have been on this road many times and sometimes I felt like I was riding sideways! Once on the 62 it is only about 25 miles to Pioneertown Road… turn left and about 5 miles, some Joshua Trees, boulders and rock formations later I pass one of the best honky tonks around…. Pappy and Harriet’s Palace. Another 5 miles and I arrived at the Rim Rock Ranch.

There were about ten of us hanging out at the ranch. It was a great place!  I won’t go into the details of the birthday party but we rocked the high desert!

Somehow, I managed to miss Pioneertown itself on that trip. When I look back, I have no idea how this happened! I just rode right on by it. So, when I heard my favorite band The Farmers were playing at Pappy’s, I had to go! Once again, I loaded my bike for camping and met the band at Pappy’s on Saturday. I brought some friends with me this time. They stayed in the Pioneertown Hotel and I pitched my tent out back.

Let me tell you about Pioneertown. Pi-Town started as a living motion picture movie set in the old west style. From what I understand it was built in the 1940s sometime. The concept was the actors would live in the set while they were filming. If you have seen Judge Roy Bean, Annie Oakley or The Cisco Kid, you have seen Pioneertown. Roy Rogers, Barbara Billingsley and Gene Autry were a few of the actors you could find on set. Also, to be found is the Pioneertown Bowling Alley. Gene Autry would tape his show there and he rolled the first ball in the late 1940s. Check out the murals!

During the summer months, old west re-enactments take place on Saturday right on Mane Street. Also, behind Pi-Town, there are corrals that can be rented for your horse(s).

(The hotel is under new management and no longer allows tent camping, but the owner of the corrals does. There is a giant fire ring and it has plenty of room by the fence to set up.)

More of my photos: http://wp.me/pyPkl-a6