After a bit of kvetching on my part about wanting to ride somewhere outside of my county, I came up with a plan to do an overnighter to Big Bear and Lake Arrowhead.   I talked to a few friends to find out if they would be interested and they said yes.  We rented two cabins and I planned our trip. I chose the route we would take as I wanted to take SR38 from Yucaipa to Big Bear… it appeared to be a longer and more scenic route.

The day before leaving, I walked out of my office and my bike wouldn’t start. I called my shop and we guessed it to be a short or a dead battery. I then called a friend for a tow. We dropped the bike at the shop and I waited til morning for an answer. It seemed to take forever… but I suppose that is what happens when you are anxious for news (and for a new battery to charge). I told my riding partners to go without me and that I would catch them… provided it was just a battery issue.

While this was happening, my riding partners were having issues of their own! One of them had a cracked case and was puking oil. Another friend needed a new tire desperately! So, two of the group rode up to Temecula for a tire change. Once I got the word my bike was done, I got on it, met another friend and took off to Temecula. It was about 2:00pm before we finally… really… got on the road.

From Temecula we took the back roads through Winchester to Beaumont and eventually to Yucaipa. We stopped for a quick coffee at a Starbucks before heading up the 38 to Big Bear Lake. SR38 was pretty awesome in that it was curvy, not too busy with traffic, lots of trees and the weather was hot and sunny. Along the way, I noticed there were many hot rod cars on the road… it was very difficult to concentrate on riding when I wanted to rubber neck! We pulled into town and there were even MORE hot rods. Turns out Big Bear has an annual run the second week of August.  I was in heaven! Well, we kept riding through town looking for our hotel and missed it. We had to double back and really search for the turn off.

No wonder we missed the cabins! They were on a side street off the main drag of Big Bear. The cabins were cute.  A little threadbare but cute. 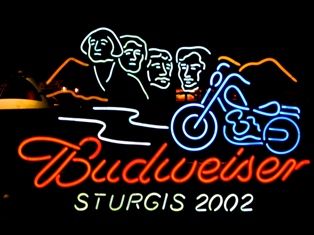 After we checked in, we went looking for a place for dinner. We decided on the Italian place around the corner.

We will not be going there again.  My pasta was mushy… two bites and I gave up… I sent it back. Then I had to argue that I shouldn’t be charged for something I had two bites of. The highlight of the dinner was the stuffed artichoke. And we all felt kinda queasy the next morning. Not a pleasant experience.

From there we headed down the road to the famous “Chad’s Place”. Biker friendly. Rock n Roll. Multiple bars. Pool tables. Appetizers. (Wish we had eaten here.) The band was really good. We had to giggle though, everytime the band stopped the jukebox came on and it was hip hop, rap and top 40 dance.

We got back to our cabins around 1:30am and fell asleep to the sound of the bars emptying out.