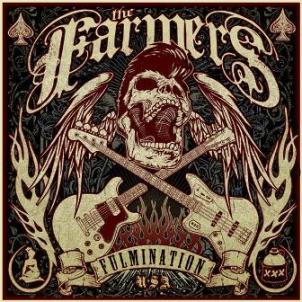 Anyone who knows me… knows… I shamelessly LUV The Farmers. They are my favorite band ever (the band formerly known as the Beat Farmers). I have been the shameless fan that I am since the early 90s… if you include the time some of the band members spent in The Penetrators… since high school.

I have travelled with them and to see them. I have attended weddings and funerals with them. Lord knows I have drank copious amounts of alcohol with them. I have even been a back up kazoo player! I am super honored to count them among my friends.

They are releasing a new CD this week… FULMINATION… hooray!!!

Below is an article about them and the new cd….

And as Country Dick used to say…. Pay Up Cheaters! …. buy the cd (or any of the Beat Farmer cds) and enjoy!

Listening to new albums while eating breakfast can sometimes be risky, as I discovered with “Fulmination,” the new, dozen-song release by San Diego roots-rock pioneers The Farmers (formerly the Beat Farmers).

Barely 40 seconds into the Mariachi-tinged “Mexicali Nights,” a very deep-voiced man began a recitation that nearly caused me to choke on my bowl of Organic Hemp Plus Granola. The same voice is readily audible on “East County Woman,” “The Invaders” and the rip-roaring garage-rock classic-to-be “Aw Man, C’mon!”

Could this be the ghost of Country Dick Montana, the Beat Farmers’ legendary leader and founder, who died in 1995 while performing on stage in Whistler, Canada? Or, perhaps, some archival recording that had been deftly spliced into this new Farmers’ song by top San Diego album producer Sven-Erik Seaholm?

A call to Farmers’ bassist Chris Sullivan set me straight, although only after part of my breakfast had become lodged somewhere between my throat and my nasal passages.

“It’s (new Farmers’ singer) Corbin Turner,” Sullivan told me. “He doesn’t try to do Country Dick, but at times you hear Country Dick channel through him. When that happens, Jerry (Raney, singer-guitarist) and I look at each other, and go `Wow.’ It’s kind of spooky.”

The enormous void left by Country Dick, who launched the Beat Farmers here in 1983, is unlikely to ever be filled by any man or mutant. Nor, for that matter, are the voids left by guitarist-singer Buddy Blue (who passed away three years ago) and bassist Rolle Love, who left the band in the aftermath of the Farmers’ 2005 album, “Loaded.” (Drummer Joel Kmak, Country Dick’s replacement, is still on board.)

That leaves the very able Raney in the driver’s seat of this perpetually earthy musical vehicle, which still sounds revved up and ready to go. One of the most engaging albums by any San Diego band in recent years, “Fulmination” benefits from Seaholm’s sharp, no-nonsense production and the revamped quartet’s ability to salute and extend the musical traditions established by Montana and the band’s original lineup more than 25 years ago.

The Farmers perform a free CD release show tonight 6/18/09 at the Casbah, with special guest Murrugun the Mystic. Here’s betting the band will have no problem fulminating, in the best possible way, from start to finish.

Link to the article as it appears on SignOnSanDiego:   http://www.signonsandiego.com/entertainment/street/2009/06/the_farmers_free_cd_release_gi.html

3 Responses to “The Farmers ~ Fulmination”